The Natura 2000 Network in Umbria

With a total area of about 8,456 km2, Umbria is one of the smallest Italian regions. However its territory is very heterogeneous and rich in environmental diversity due to a wide variety of lithological types, a wide altitude range (about 2,400 m), a wide spectrum of climatic conditions and a long-term human settlement, concentrated mainly on the major plains.

The sites of the Natura 2000 Network in the Umbria region represent a system of protection of the environmental and landscape heritage aimed at the conservation and protection of habitats and animal and plant species of regional, national and European interest.

It is a unique natural heritage, embedded in a territory rich in peculiarities. The hills of the western areas of the region with the wide Trasimeno lake have Mediterranean environmental characterization; the Apennine chain marking the eastern sector, where the limestone orography reaches the highest altitudes in the area of the Sibillini Mountains, is characterized by continental environments; the two regional sectors are separated by the articulated valley system of the Tiber River and its catchment basin and by the Umbra Valley that crosses the region from North to South.

Even though it does not reach the sea the Umbria region environmental landscape is characterized by a very high biodiversity that draws its characteristics from the complex and millennial relationship between nature and men.

Go to the regional WebGis 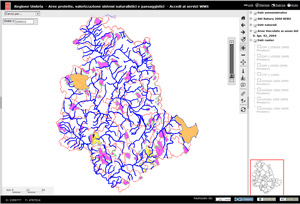